Django-rest-auth library provides a set of REST API endpoints for registration, authentication (including social media authentication), password reset, retrieve and update user details, etc. By having these API endpoints, your client apps such as AngularJS, iOS, Android, and others can communicate to your Django backend site independently via REST APIs for user management.

OAuth (Open Authorization) is an open standard for token-based authentication and authorization. OAuth allows an end user's account information to be used by third-party services, such as Facebook, without exposing the user's password. It acts as an intermediary on behalf of the end user, providing the service with an access token that authorizes specific account information to be shared. miniOrange provides a solution by introducing a WordPress plugin called OAuth Client to support Django single sign on and allows a user to access the website by using their Django REST Auth API (OAuth Server) to login into WordPress. OAuth Client plugin also allows login with Google, Facebook, Twitter or another custom OAuth server. OAuth Client plugin works with any OAuth provider that conforms to the OAuth 2.0 standard. 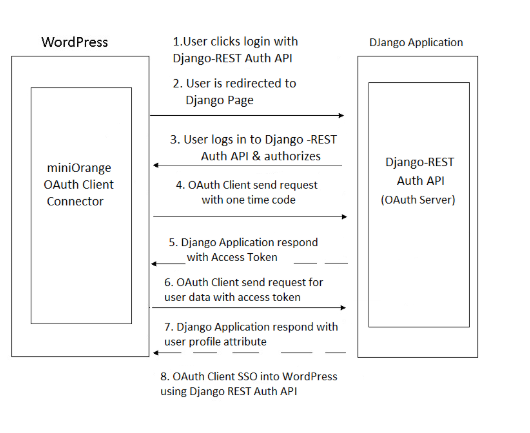 Thus, with miniOrange OAuth Client plugin, you can configure your site to allow users to access your site using Django Application. This allows the users to seamlessly access your services without having to separately register themselves on your site.

miniOrange provides 24/7 support for all the Secure Identity Solutions. We ensure high quality support to meet your satisfaction.

miniorange provides most affordable Secure Identity Solutions for all type of use cases and offers different packages based on customer's requirement.